The day was hot and humid. Knowing what I was planning to wear for the next couple of days, I was filled with trepidation. I’m going to lose so much weight during Comic Con thanks to the buckets of sweat pouring from my body.

San Diego Comic Con has this aura of glamour from people who know of it but have never been to it. The way the news always talks about it makes it sound like a blast with no consequences.

A lot of SDCC is being shuffled around the convention center by harried volunteers trying to control massive crowds. You spend inordinate amounts of time standing in line to get into panels or to buy merch. Wednesday was only the first day of my latest SDCC adventure, and my calves were already killing me.

The collective excitement makes it worth it though.

It’s the same for Comic Con. At Comic Con, you’re surrounded by some of the nerdiest people in the world, and you’re one of them.

On preview night, not many panels are available to attend. (Maybe like one or two.) The only place open is the Exhibit Hall, since preview night has always been intended for those wishing to purchase exclusive items. If you’ve never been to San Diego Comic Con before, the Exhibit Hall is the place that will awe you the most. (I know it awed and pleased me my first time there.) It’s huge! And it’s filled to the brim with displays, stands, and booths all devoted to some of the best pop culture icons ever.

I saw a $9000 miniature version of the Starship Enterprise. 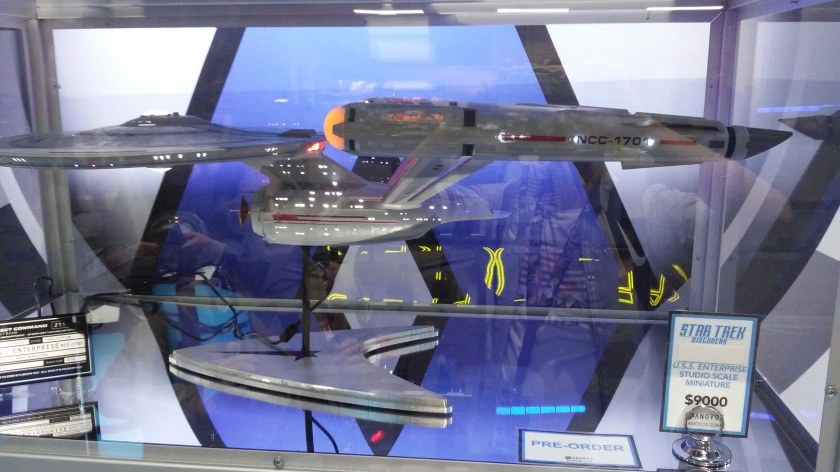 Steven Universe, Garnet, Amethyst, and Pearl all had giant balloons of themselves dominating the center of the Hall.

There was an adorable statue of Goku that I absolutely had to pose with like an idiot just because it was there.

The atmosphere in the Exhibit Hall is intoxicating. (In more ways than one. It can get pretty crowded in there, so I suggest you try and inure yourself to the smell of sweat.)

You should expect all the aisles of the Hall to be packed to the brim. I felt like every person in there was a red blood cell flowing down a vein superhighway. (There was an occasional blood clot by particularly popular booths.)

My goals for preview night were to purchase a few gifts for friends and see if I could buy myself an exclusive figurine of my favorite character from the graphic novel series Saga. (His name is Ghüs, and the figurine had him wearing his little red jammies.)

Unfortunately, I couldn’t get myself a Ghüs. The line was just too huge. But I did succeed in getting my friends some things! So hooray for small victories.

Expect a few more posts about my Comic Con adventures. But I guess they’re not really adventures. More like a bustling walk-a-thon.