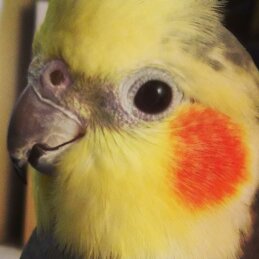 So, as my last post described to you guys, I went on a cabin trip with my sister and some other family members this winter.

Now, you may have been wondering what I did with Froley, my beloved pet cockatiel, while I was off living it up in the frigid snow.

Well…I left him at my sister’s house.

This might sound like a lackluster pet-owner decision, but it made sense. Just hear me out. The cabin was rented for two nights, meaning only three days would go by without Froley having me by his side for the majority of his time. And having him safely in a familiar domicile instead of in a wintry cabin was a no-brainer.

So I left Froley enough food and water for the time I was going to be gone, hung up one of his favorite toys in his traveling cage, and attached two of his favorite perches to the walls of the cage as well. One of these perches looks like a thick wooden stick. The other is mint green in color, and sandpaper-rough in texture.

I left him feeling reasonably confident that he would be okay until my return.

Once we made it back to my sister’s house, I rushed to Froley’s cage to see how he was doing. He was shrieking loudly in glee at my appearance. (The poor fella probably thought I had left him forever.) He was pacing back and forth on his mint-green perch in his eagerness to be let out so the cuddles could recommence.

Having had Froley for about ten years, I know that he paces whenever he really wants to be let out.

I wanted to oblige him, but, to my dismay, I noticed something wrong with his mint-green perch before I could take him out.

It was covered in blood.

Apparently, my little Froleybird decided to pace on the damn thing incessantly while I was gone, so much so that he cut up his feet with scrapes.

The first thing I did was get rid of the blood-stained perch. Not only had it hurt Froley’s feet, it was hurting my heart to look at it. The second thing I did was cover every inch of Froley’s cage in Kleenex or paper towels so that no rough surface could reopen the wounds on his feet. The final thing I did was take Froley out of his cage, place him on my knee, and give him those head scratches he desired so much.

Don’t worry, he’s doing fine now. The scrapes are gone, and he’s back in his own home. Honestly, he didn’t even seem to care that he was cutting his feet to ribbons. It’s like he didn’t notice.

As of today, I have de-tissue-papered his cages. I believe his feet can handle it now.

But I have a big problem.

What am I supposed to do the next time I go on a trip?